Millennial Media’s recently released Q2 S.M.A.R.T. Report takes a deep dive into the Auto industry, coming up with information on what makes the vertical special: eg. 70% of campaigns give the consumer the ability to search a site, compared to only 30% of total campaigns on Millennial Media’s platform. 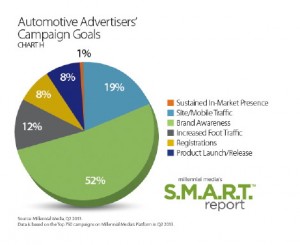 In fact, 70% of auto campaigns used a ‘Site Search’ feature. Car manufacturers often drove consumers to a landing page or mobile site, where they could search for info on numerous different car models.

Among other points we noted:

This entry was posted on Monday, October 7th, 2013 at 14:30 @646 and is filed under Scuttlebut. You can follow any responses to this entry through the RSS 2.0 feed. You can leave a response, or trackback from your own site.