The DPAA Summit – Video Everywhere got off to a good start with Cat Greenleaf, host of Talk Stoop, interviewing Barry Frey, president and CEO of the DPAA. 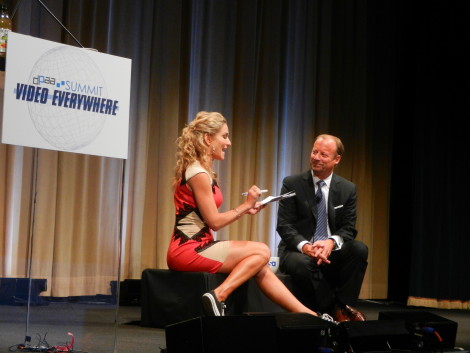 Greenleaf said that her 55-second regular appearance of New York’s 7,000 taxis and others across the country has built her show. And Frey discussed a 10 network pilot program underway with Ford Dealers.

Following that was a good panel headed by David Verklin, partner, Calera Capital. Among the points discussed were whether digital place-based media is a risk (considered not a risk BUT advertisers are looking for how they can integrate it into their marketing strategy to build their brands) and the need for transparency on both the sides of marketers and their agencies for true partnerships, and the need for effective measurement.

This entry was posted on Tuesday, October 22nd, 2013 at 15:42 @696 and is filed under DailyDOOH Update. You can follow any responses to this entry through the RSS 2.0 feed. You can leave a response, or trackback from your own site.