Could 2013 mark the end of Black Friday in the US as we know it?  It all started when Thanksgiving + Hanukkah fell on the same week this year, creating the mega-holiday now known as ‘Thanksgivukkah’ – creating a cascading effect that has squeezed out a week of time between Thanksgiving and Christmas. 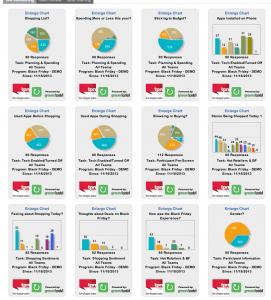 In 2012, there were 31 days/five weekends for shopping before Xmas. In 2013, 25 days/four weekends. All this translates into a much shorter shopping season, creating a huge challenge for retailers both off and online.

The luck of the calendar has forced retailers like BestBuy, Walmart and Target to throw out all the rules for previous Black Fridays and try new strategies like, announcing ‘Doorbuster’ deals two weeks before Black Friday – AND to combat the Amazon juggernaut, retailers are offering deals to consumers with same-day delivery, free shipping and pricing matching!

But what does this really mean? Has Black Friday lost its relevancy? – will the shoppers skip the store and order online? – are the deals enough to get people to plan earlier and shop sooner?

The big difference between this study and previous Black Friday research is that it’s the first study that really closes the gap between theory and reality on shopper behavior on the (two) busiest shopping days of the year. What the other marketing intelligence is doing is surveying shoppers well before they get there .

It’s one thing to plan it…it’s another thing to follow a plan. The reality is the heart, instinct and emotion will always take over the logical, best laid plans. TPN is measuring that emotional reality.

This entry was posted on Wednesday, November 27th, 2013 at 14:27 @643 and is filed under DailyDOOH Update. You can follow any responses to this entry through the RSS 2.0 feed. You can leave a response, or trackback from your own site.