Michael Barrett, recently chief revenue officer at Yahoo!, has joined Millennial Media, Baltimore, Maryland, as CEO and member of the Board of Directors. 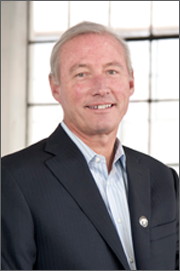 The announcement follows the resignation of Paul Palmieri, company founder and CEO, as CEO and from the board of directors, effective immediately. Palmieri will join New Enterprise Associates as venture advisor, focused on technology out of its Chevy Chase, Maryland office.

“Some time ago, I expressed my desire to the board to transition out of the company, and return to working with early stage entrepreneurs,” says Palmieri. “The board and I worked collaboratively as it sought to identify a strong CEO for the next phase of the company’s growth. I’m excited about the company’s future, and confident of the team’s ability to continue executing on our vision to transform advertising through mobile.”

Prior to Yahoo!, Barrett was the CEO of AdMeld, a programmatic supply side platform acquired by Google in 2011. Barrett has had a long career in advertising and media, having served as chief revenue officer at AOL and Fox Interactive Media among other executive leadership roles.

“Palmieri has demonstrated masterful entrepreneurship in taking Millennial from a concept, through competition, growth, scale, and transition to a fast growing public company and leader in its industry,” says Patrick Kerins, general partner, New Enterprise Associates and the company’s lead independent director. “Paul’s vision has consistently been out in front of industry shifts, and his strategic execution has positioned the company at the center of the mobile-led, cross screen and programmatic future of digital advertising.”

“Michael Barrett is an exceptional leader who has shown incredible skill in leading companies and teams to big success in the digital advertising industry,” says Wenda Millard, president of Medialink and member of Millennial Media’s board of directors. “Millennial Media is well positioned, and there is no executive better suited to lead Millennial Media’s next phase of growth. With Michael’s diverse expertise in scaling advertising businesses in both the brand and programmatic spaces, he will be instrumental in taking the company to the next level.”

“The mobile market is on a steep growth trajectory and I look forward to building on the leadership position Paul and the team have created to bring Millennial to new heights,” Barrett says. “I have long admired the company’s ability to deliver superior monetization to its publishers and developer partners and powerful ad solutions to its brand and performance advertisers. This was simply an irresistible career opportunity for me to pursue.”

For the fourth quarter of 2013, proforma combined revenue (including results of the company’s Jumptap Inc. subsidiary for the entire quarter) is expected to be between $106 million and $109 million, up from the previous expectation of $95 million to $100 million.

This entry was posted on Friday, January 31st, 2014 at 00:10 @048 and is filed under Scuttlebut. You can follow any responses to this entry through the RSS 2.0 feed. You can leave a response, or trackback from your own site.