The numerous LED displays that Daktronics of Brookings, S.D., has installed in New York, New Jersey and the surrounding metro areas over the years are taking center stage as hordes of people descend near the Big Apple for the biggest sporting event of the year as the Denver Broncos battle the Seattle Seahawks for football supremacy this Sunday. 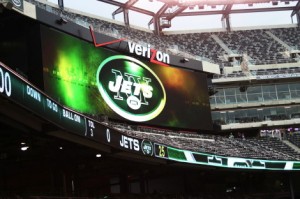 Playing host to this year’s game, MetLife Stadium itself features more than 40,000 sq. ft. of LED video displays in and around the stadium that were designed, manufactured and installed by Daktronics.

This includes four main video displays in each corner of the stadium, each measuring 30’ high x 118’ wide with 12HD pixel layouts.

Fans will flock to the New York area for this main event, but they will also be encountering many other locations in the area where Daktronics displays are prominent – the most prominent location being Times Square which is hosting Super Bowl Boulevard. Times Square contains the largest grouping of spectacular digital advertising displays in the world, many of which were manufactured by Daktronics. 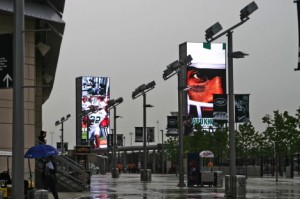 Arriving to the area, travelers will encounter any number of the more than 1,000 transportation-focused Daktronics LED video displays within a 100 mile radius of MetLife Stadium.

These displays are strategically placed along high-traffic roadways and at airports to show helpful way-finding information such as traffic congestion, alternate routes, flight statuses and other transit details.

While we know that it does more, it does seem that Daktronics is becoming synonymous in our minds with sports stadiums at every level. In New York and New Jersey alone, there are hundreds of Daktronics installations at local high schools and parks, including scoreboards, LED displays and audio systems

This entry was posted on Friday, January 31st, 2014 at 12:02 @543 and is filed under DailyDOOH Update. You can follow any responses to this entry through the RSS 2.0 feed. You can leave a response, or trackback from your own site.