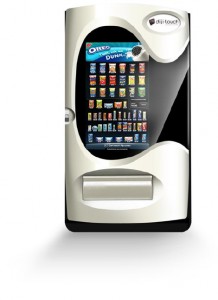 The initial deployment of diji-touch is part of a national rollout occurring within the next 18-to-24 months, with a goal of 1,500 machines deployed in the first year. The network will be situated in hospitals, colleges and universities, and high traffic location types such as museums and public transit.

This offering of heightened consumer engagement at the point of purchase presents media placement opportunities for both endemic advertisers whose products are in the vending machines and non-endemic advertisers seeking a digital out-of-home network.

“We became aware of BroadSign when our agency, Digitas, conducted an RFI and RFP to determine who offered the highest grade solutions for digital out-of-home ad serving,” says Michael Miller, director of marketing foodservice at Mondelez. “BroadSign software was selected as the best fit for our needs because it supports the development of interactive features allowing the diji-touch network to create unique connections with consumers as they purchase products.”

The diji-touch network will increase the level of interaction achievable in Mondelez’s multichannel campaigns. In promotion of Oreo, one of Mondelez’s $9 billion brands, consumers are invited to draw a smile in the icing of an Oreo cookie on a diji-touch screen prior to purchase.

“BroadSign prides itself for bringing constant innovation to the digital signage industry, and as such, we are thrilled to support the diji-touch network,” says Skip Beloff, BroadSign’s vice-president of sales. “These interactive vending machines completely change the traditional consumer experience and our software is a safe bet for enhancing future interactions.”

This entry was posted on Tuesday, February 11th, 2014 at 16:59 @749 and is filed under DailyDOOH Update. You can follow any responses to this entry through the RSS 2.0 feed. You can leave a response, or trackback from your own site.