We first wrote about this film festival just before Christmas in our post ‘Art For Art’s Sake (No Money For God’s Sake)‘ and it’s thrilling to see Avanti throw themselves at the opportunity that it affords.

Billed as the ‘largest public art event ever’ the UK festival is part of a wider global event – the festival is however unique as it is screened exclusively on digital out of home networks (rather than anywhere else). 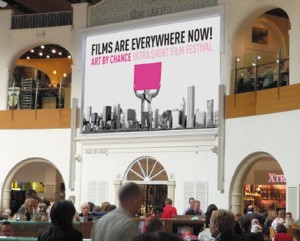 In addition to showcasing the event across its own digital network Digital Life (800 screens in 150 shopping locations Avanti have recruited a number of other networks to showcase the event (selected, we are told, on their suitability for the film format, dwell time and audience reach).

These networks include the City Gateway site in Manchester, Streetbroadcast, Sub TV and the BBC’s 16 large format LED Screens located in major city centres – good to see UK Television License Fee payers’ money being put to good use, Ed – together these networks will reach an audience of 25m a week.

An Avanti spokesperson told us “Short films are everywhere now and the association between ‘submitted content’ delivered over a public medium echoes the growing phenomenon for ‘user-generated content’ popularised by Youtube. In this case, however, DOOH with present Art by Chance films as an eye catching encounter to the public during in everyday life such as whilst shopping or socialising with friends”.

The Festival which runs from 22nd May – 3rd June will include 30 short-films submitted around the theme of ‘Journey’ – films will be selected by a panel of international judges (Ivan Clarke, Head of Digital Kinetic Worldwide is just one of the experts on the judging panel) – with strong emphasis being placed on how the films adapt to the DOOH environment as much as their cinematographic merit.

Art by Chance is open to all genres: fiction, animation, documentary and video art.

Simon Rees, CEO of Avanti told us “This festival is a fantastic opportunity for both filmmakers and the DOOH sector to showcase its merits on a national and global scale. In collaboration with our network partners, DOOH offers an exciting and dynamic creative canvas for which our clients and advertisers are realising the merits. The scale of our networks provides UK coverage to this exciting global event which is a great illustration of the creative opportunity inherent in out of home digital display”

For anyone interested in taking part the deadline for entries is March 20 2009. The Festival will be available online from June 4th to July 4th 2009.

This entry was posted on Friday, March 13th, 2009 at 15:05 @670 and is filed under DailyDOOH Update. You can follow any responses to this entry through the RSS 2.0 feed. You can leave a response, or trackback from your own site.