Registration is now open for The DailyDOOH Media Summit, which takes place in London on Tuesday 13th May, 2014 in The David Lean Room at BAFTA, and we have a supremely impressive speaker line up for you… 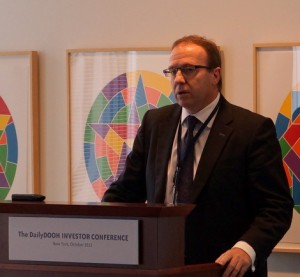 Dirk Huelsermann, Head of VUKUNET EMEA and OVAB Europe Founder and President will open the summit, no doubt with a few choice words (we bet that London Is The Place To Be will feature heavily in that address).

Ocean Outdoor’s CEO Tim Bleakley keynotes the day with ‘A Manifesto for Out of Home in a Digital World – Growth or Cannibalisation – Which is it to be ?’.

Following that we keep the pace high with a (still TBA) speaker ‘Why We Love Digital Outdoor’ immediately followed by Koffeecup‘s Thomas Michelou discussing ‘Creating for Digital Outdoor’.

After a short networking break (time for tea / coffee and networking is a big theme at our events as regular readers will know) UK Twitter Supremo, Bruce Daisley (Twitter UK) will explain how he sees Twitter and outdoor being great bed fellows. Bruce has promised us he will share recent ground breaking examples from around the world in his speech entitled ‘Screens and Streams’.

Before lunch we have Stephen Gale, Sales Director and Founding Partner at ECNlive, Tom Goddard and Lord Sugar.

Immediately after lunch (hey, we know how hard it can be to get folks back from all that food and conversation) we have Six Elevator Pitches from Technology Innovators as previously detailed here – these are short, quick fire five minute elevator pitches designed to impart knowledge (of course) but also get everyone going for the afternoon again.

When folks have recovered from that they will hear from David McEvoy, Marketing Director, JCDecaux. JCDecaux have of course, invested heavily in digital and most recently in a new national screen based channel. With national scale, headlining sites and more, he will explain why ‘Channel 6 – If this was a TV channel it would be the Fifth Biggest in the Country’ and what it means to the rest of the Digital Outdoor Industry.

Next up is Alex Timbs, Head of Technical Sales Operations at AOL Advertising Europe with a discussion entitled ‘Aol. Inc. Big in Online! Can We Be Big in Outdoor?’.

After the final networking break of the day we have invited a man, who many in the UK Outdoor industry will know well, Nigel Clarkson who held a number of senior roles in our world but whom is now Commercial Director at Weve. Nigel will discuss how to amplify outdoor and the role mobile can play in his speech ‘A Match Made Outdoors’.

And we are very excited to say that rounding off the day for us will be Shaun Gregory, Global Advertising Director, Telefonica who will by July, be the new CEO of Exterion Media (nee CBS Outdoor UK). His presentation is entitled ‘Surrounded by Screens’.

Tickets for this event are on a first come, first served basis, cost GBP 195 each and can be ordered here.

This entry was posted on Thursday, April 17th, 2014 at 13:23 @599 and is filed under Scuttlebut. You can follow any responses to this entry through the RSS 2.0 feed. You can leave a response, or trackback from your own site.