Photographers’ works are now the subject of Pattison Onestop’s ongoing Art in Transit campaign, with Drowning World by Gideon Mendel surrounding viewers within the massive underground gallery in the Queen’s Park subway station with his Water clips playing every 10 minutes on the PATTISON Onestop digital platform screens throughout the subway system. 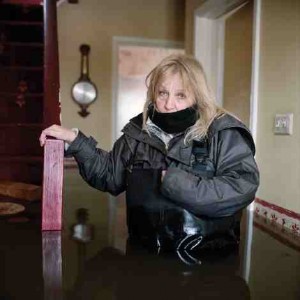 And PATTISON is also supporting Retail Compositions by Owen Kydd, with Kydd’s works displayed on digital screen kiosks that have been positioned within the Allen Lambert Galleria at Brookfield Place, a highly used access point into the PATH mall—an immense underground shopping complex.

An official public installation of Scotiabank CONTACT, Contacting Toronto features London-based, South African photographer Gideon Mendel’s portraits of people whose lives have been devastated by floods, as well as excerpts from his Water videos, which capture people navigating their lives in the midst of recent floodwaters.

Drowning World is an art project with photojournalistic roots, which Gideon Mendel began in 2007 as a response to climate change. This long-term effort spans 9 countries to date: the UK, India, Haiti, Pakistan, Australia, Thailand, Nigeria, Germany and the Philippines.

“We hope the immersive experience offered by PATTISON Onestop’s Contacting Toronto: Drowning World initiates conversation and that our partnership with CONTACT emphasizes the vital role played by the arts in the social, economic and educational fabric of our community,” said Randy Otto, president, PATTISON Outdoor Advertising. “PATTISON recognizes the importance of private sector investment in culture and is proud to support four unique Scotiabank CONTACT exhibitions this year.”

Contacting Toronto: Drowning World is co-produced by PATTISON Onestop and Art for Commuters in partnership with Scotiabank CONTACT Photography Festival.

Durational photography is a term coined by Los Angeles-based artist Owen Kydd to describe his works, which oscillate between still photography and video. Kydd’s tightly composed, fixed-shot video loops appear at first to be static images, but reveal subtle movement over time. His playful arrangements mimic outdated displays and utilize tools of the trade, such as shelving brackets, pegboard, plastic bags, and the quintessential mannequin bust.

In Allen Lambert Galleria at Brookfield Place, the screens appear as if they were permanent fixtures in the space, making them ambiguous for viewers who might otherwise expect to see commercial imagery. The slow pace of Kydd’s durational photographs necessitates an attentive observer. This site-specific installation includes works from Kydd’s Retail Compositions series and three newly commissioned pieces informed by the setting of Brookfield Place.

Presented in partnership with Brookfield Place this display is supported by EY and Pattison Outdoor Advertising.

This entry was posted on Wednesday, April 30th, 2014 at 16:00 @708 and is filed under DailyDOOH Update. You can follow any responses to this entry through the RSS 2.0 feed. You can leave a response, or trackback from your own site.