The Michigan State University Spartans are using Christie MicroTiles to promote its powerful men’s basketball program to potential recruits as well as current players and fans. 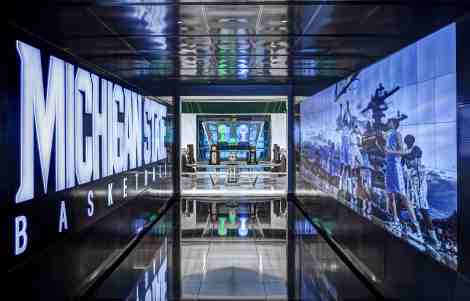 With athletic recruiting a highly competitive endeavor, the Spartans wanted something extra to bring the best prospects to their program.

The plan was to install a video wall – but not just any video wall – into the long, narrow corridor 20’ above the basketball court leading into the athletic complex. LCD flat panels were the first choice. but the school was concerned about the quality of the images that would show on the display – especially when viewed close up.

“There are several trophies at the end of the corridor, including two men’s NCAA championship trophies, but the college wanted to be able to customize the experience for visitors,” says Dean Harris CTS, designer technology services, Integrated Design Solutions. “Coach Izzo and his staff are well known and respected and the school wanted a digital display system to highlight that and the successful history of the program. They wanted to show off what Michigan State does and can do for potential recruits.”

The school was also concerned about the larger bezels of flat panels interfering with the cohesiveness of the display they wanted. Harris, who was familiar with Christie MicroTiles, had some MicroTiles’ samples brought in.

“We took the MicroTiles demo out to the coaches, the athletic director and others at MSU,” says Harris. “They said, “If we are going to do this, we have to have the right product so the content will be crystal-clear up close.” The visuals on the MicroTiles are very sharp even when you stand just a few inches away from them. Everyone’s reaction was ‘Wow!’ We blew them away. It was the tiny seams, the clarity of the images, the fact that they are serviceable from the front – the MicroTiles just looked stunning and did exactly what they wanted. They were the right choice.”

Located two feet off the floor and fitted into the wall, the Christie MicroTiles video wall is comprised of 110 tiles in a 22-unit wide by 5-units tall array and – using a Christie-designed pedestal – seamlessly blends into the architecture.

“The MicroTiles wall is located in a dark and narrow entry corridor that leads to a brightly lit rotunda,” says Harris. “One of our architects explained that the corridor was designed to replicate the feeling of a student athlete walking through the player’s tunnel into an arena. The vivid content on the MicroTiles wall draws your attention as you walk down the corridor that ends at a large trophy display in the rotunda. It is rather impressive.

“There is quite a lot of talk around campus about having to go see the new video wall at the Berkowitz complex. We’re also hearing that other MSU departments would like to have one, too.”

The school’s video production department produces a variety of branded content with one highlight being a line of past coaches that includes their history at the touch of a button while game days include satellite feeds and other MSU-branded content.

This entry was posted on Thursday, May 8th, 2014 at 07:00 @333 and is filed under Scuttlebut. You can follow any responses to this entry through the RSS 2.0 feed. You can leave a response, or trackback from your own site.