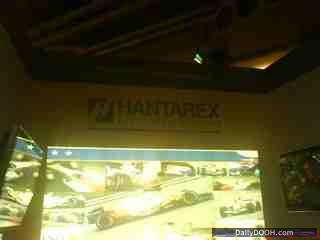 The ITrans screen (from Screen Technology in Cambridge, UK) on the Hantarex stand was so bright (several thousand candelas) that it was difficult to take a good picture of it (we had to angle our cameras high to reduce the glare so couldn’t get the whole screen in the shot). Hantarex probably had more screens than anyone else crammed onto their stand from small to large (the ITrans being the largest of course).

We liked one of Hantarex’s portrait touch screens on the outside of the stand but noticed that salesmen had to tell every visitor (including us) who stopped and stared at the display, that it was touch screen and you could interact with it. The golden rule of touch screens is to have content that yells “TOUCH ME” or indeed have some simple wording on the screen that does say “touch me” – it’s not rocket science to get things like this correct.

There were a lot of good stands at ISE showing various sized displays, we particularly liked this one with the variety of size and shape screens and the well the whole was laid out.

The candela (symbol: cd) is the SI base unit of luminous intensity (that is, power emitted by a light source in a particular direction, with …
en.wikipedia.org/wiki/Candella

This entry was posted on Thursday, January 31st, 2008 at 07:42 @363 and is filed under Scuttlebut. You can follow any responses to this entry through the RSS 2.0 feed. You can leave a response, or trackback from your own site.