Creative Use Of 3D Space

This display is part of a new exhibition recently opened this month in the pavilion, promoting the ambitious Skolkovo project outside Moscow, which Russians are referring to as the “Russian Silicon Valley”.

We think this is a very creative use of screen shape, with the screen design and content reflecting chemical elements and their symbols with references to the classic Periodic table in chemistry. 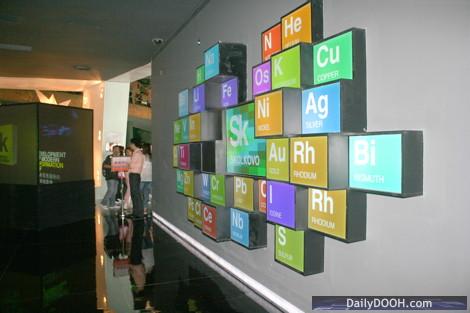 This entry was posted on Thursday, September 30th, 2010 at 08:24 @391 and is filed under DailyDOOH Update. You can follow any responses to this entry through the RSS 2.0 feed. You can leave a response, or trackback from your own site.

2 Responses to “Creative Use Of 3D Space”