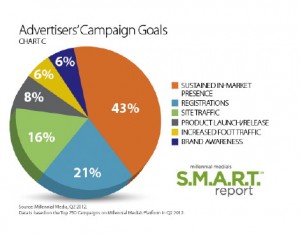 With Smartphone ownership worldwide forecast (by eMarketer) to grow at a compound annual growth rate of 37% into 2016, Millennial Media is keeping close track of the use of the smartphones and other mobile devices in its quarterly S.M.A.R.T. reports.

In its latest report covering Q2, it notes the eMarketer data that shows that, by 2016, Smartphones are expected to be used by nearly one-third of the world’s population.

The Asia-Pacific region will see the largest growth of Smartphone users, due in part to the area’s large populations, with Indonesia and India experiencing the greatest Smartphone user growth into 2016. In the Middle East and Africa, Smartphone users will experience a high rate of growth through the period, but in 2016 will still have the lowest saturation rate of any region.

European nations will see Smartphone user growth rates above those of the United States. With the number of mobile phone users in Europe
already high, conversion to Smartphones and adoption of additional devices will take place into 2016. And the United States will see similar device adoption trends through the forecast period, such as mobile users upgrading and adding devices to their households.

The most frequently targeted audience on mobile devices in Millennial Meia’s platform in Q2 was IT Decision Makers. This was followed by Gadget Geeks and In-Market Auto Intenders.

The report notes that five different verticals experienced triple digit growth year-over-year, led by the automotive industry which grew 372%.
·
Other points noted in the Q2 report include:

This entry was posted on Friday, October 5th, 2012 at 07:57 @373 and is filed under DailyDOOH Update. You can follow any responses to this entry through the RSS 2.0 feed. You can leave a response, or trackback from your own site.