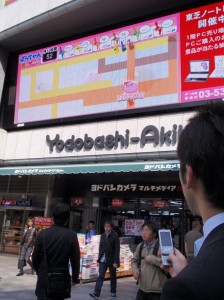 The game is played using the mobile phones of participants who compete to paint the most squares on the screen, while simultaneously hunting for Toshiba’s way to cute mascot called Pala-Chan.

Held at Tokyo’s famous Yodobashi Camera Flagship store in the Akihabara district,  passers by were invited to phone a number displayed on the 3×10 meter LED screen above the store entrance (YouTube users were also allowed to join in the fun and play online).

Six players simultaneously battle it out in 90 second matches, using the mobile phone keys to control their paint brushes.

Toshiba designed the campaign to promote its laptops and as a trial for bigger and better things to come. You can still play the game on Toshiba’s toshibanotepc YouTube channel.

Watch for future Toshiba events like this in the future.

This entry was posted on Wednesday, April 1st, 2009 at 08:08 @381 and is filed under DailyDOOH Update. You can follow any responses to this entry through the RSS 2.0 feed. You can leave a response, or trackback from your own site.