“We made significant investments last year, including our new offices, and we are starting off to have a great year his year,” Tom Nix, CEO of Scala, told us at a breakfast meeting Thursday morning, prior to more meetings at #dse2016. 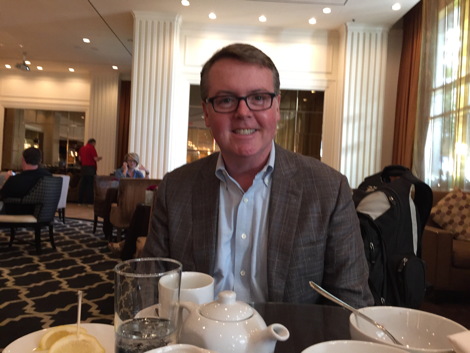 While Nix was hesitant to give an exact percentage over 2015, it seems that Scala could be up at least – and perhaps well over – 100% in 2016, with business in four specific areas.

“Digital menu boards are big with us, both with existing customers and new opportunities,” said Nix. “We currently work with five of the top 10 biggest fast food operations.”

We didn’t ask him to name them all, but we know one of them is Wendy’s.

Also big with Scala is the automotive sector, where Scala works with 12 of the top 20 automotive brands. The third big sector for Scala is in fashion retail where a mix of clients includes several multinationals. And if that’s not enough, the fourth be sector is that of retail banking, naturally in the multi-national sector.

Says Nix, “We’ll have a great year – as long as the currency doesn’t change.”

This entry was posted on Monday, March 21st, 2016 at 10:00 @458 and is filed under Scuttlebut. You can follow any responses to this entry through the RSS 2.0 feed. You can leave a response, or trackback from your own site.