Back in February, 2015, Aurora, Illinois-based Peerless AV was one of six technology companies named to take part in the $400 million DAYTONA Rising redevelopment project of the famed Daytona Raceway 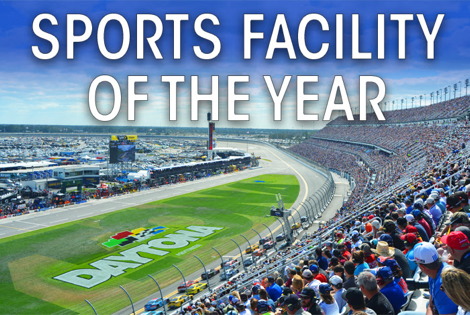 The six together formed the Daytona Technology Platform Powered by CDW. They included Presenting Partner CDW along with Belden, CommScope, The Integration Factory, Peerless-AV, and Schneider Electric.

“Fans don’t just go to sporting events anymore – they go to social events that involve sports, and technology plays a major role in enabling that ideal fan experience,” said Joie Chitwood III, Daytona International Speedway president Joie Chitwood III, in making the announcement. “We’re confident that working with this combination of industry leading companies will allow us to deliver the technology services and amenities that the racing fans of today and tomorrow can expect.”

The group sure did.

For its part, Peerless AV installed a total of 800 displays of various sizes including its Xtreme Outdoor Daylight Readable Displays, UV2 Outdoor TVs, and mounts throughout the garage/pit areas and the grandstands.

“We installed them in 2015 and early 2016 in time that all were ready before the 2016 Daytona 500 took place in February,” says Brian McClimans, vice-president, global business development of the Always Versatile Peerless-AV. “We are proud to have played a role in the success of the $400 million DAYTONA Rising renovation.

“And we’re thrilled to celebrate that the Daytona International Speedway was named Sports Business Sports Facility of the Year by Sports Business Journal. With over 800 Peerless-AV Outdoor Displays installed at the speedway, fans never have to miss a minute of the action!”

This entry was posted on Friday, June 24th, 2016 at 16:00 @708 and is filed under Scuttlebut. You can follow any responses to this entry through the RSS 2.0 feed. You can leave a response, or trackback from your own site.