London’s In-Store show is a must attend retail event in the UK (though this year the dates 30th June to 1st July unfortunately clash for us with corporate hospitality at the Henley Royal Regatta) but nevertheless it’s nice to see that MediaZest have taken a sizable stand this year. 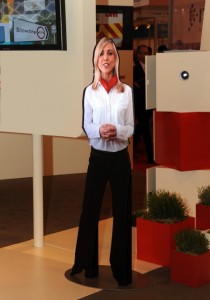 Geoff Robertson, MediaZest’s Chief Executive Officer told us exclusively “We’ve got a couple of new products we’ve developed (integrating existing systems) that we’ll be showing off for the first time and will I think generate some good interest”

Geoff added “Both are very cost effective and really geared around giving our retail clients what they want i.e. something simple to use, effective and that won’t break the bank!”

MediaZest are one of the few UK companies in this space that seem to understand brands and retail and need to shout about what they do a lot more so it is especially good to see them with a sizable presence at Olympia.

Also at the In-Store Show is 3M, another regular attendee and this year they have a coffee shop themed stand #C464 which should be nice to see. Taking centre stage will be their Virtual Mannequin (something which you will remember we named for them – at launch it was horribly called a Virtual Brand Ambassador)

Created from Vikuiti Rear Projection Film technology from 3M, the Virtual Mannequin is an entirely new and novel medium for communicating promotions and raising brand awareness in any retail environment. It can take on any shape to reflect a human body, cartoon character and a wealth of other imaginative forms. Choosing the right script and personality is vital but once in position the Virtual Mannequin becomes the centre of attention and a guaranteed crowd stopper.

At this year’s show 3M’s stand will inspire creative ideas for the Virtual Mannequin within the fast-moving retail coffee industry.

In an in-store environment, a video of a salesperson is recorded in the first instance and the Vikuiti Film is cut to the exact shape and size of their upper body. The film is then applied to acrylic, laser cut to match the body shape. Static graphics are applied to the lower half of the body which is then placed on a stand in the retail floor area. A rear mounted projector controls delivery of the video to the Virtual Mannequin and synchronises with directional speakers positioned at the base to bring it to life. The speakers help to ensure there is no sound interference with the rest of the retail store.

This entry was posted on Monday, June 29th, 2009 at 18:36 @816 and is filed under Events. You can follow any responses to this entry through the RSS 2.0 feed. You can leave a response, or trackback from your own site.