SNA Displays has promoted the head of its North American Channel program, Rick Bortles, to lead its global sales operations, citing a desire to consolidate its sales and marketing efforts across its various sales divisions. 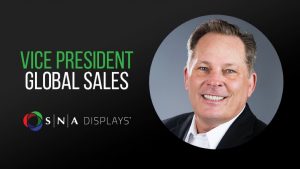 Dennis Hickey, president of SNA Displays told us “We’ve had such enormous growth in the last few years. After establishing our channel division a few years ago, we’ve partnered with some first-class integrators which is a tribute to Rick and his amazing team. As a result, that side of the business has really grown.”

Additionally, the company’s commercial division has been awarded some of North America’s largest and most prominent LED spectaculars in recent years, including several mega-spectaculars and projects for Fortune 50 brands, according to Hickey.

“Given all of this growth, it was time to improve the cross-company coordination for our sales and marketing teams. Rick’s vast experience in executive sales and management, combined with everything he’s added to our company since coming on board, makes him an excellent choice for this leadership position.”

Rick’s new title is Vice President of Global Sales and he will manage SNA Displays’ sales initiatives, from commercial operations to channel-partnership opportunities around the world.

SNA Displays is focused on bringing its clients’ creative visions to life. Established in 1993, Sansi is one of the world’s largest manufacturers of LED products, utilizing more than 2 million square feet of manufacturing space and owning more than 250 patents.

In North America, SNA Displays is headquartered in New York City’s historic Times Square and has worked with clients to create and build some of the largest and most recognizable outdoor and indoor digital spectaculars in the industry.

This entry was posted on Friday, September 27th, 2019 at 11:40 @528 and is filed under DailyDOOH Update. You can follow any responses to this entry through the RSS 2.0 feed. You can leave a response, or trackback from your own site.