Following the success of LDN Drive in the UK capital, JCDecaux UK is now launching National Drive, taking the large-format digital channel outside London for the first time. 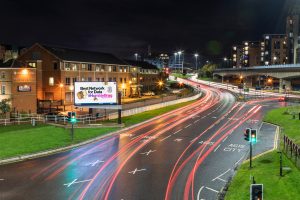 Birmingham, Edinburgh, Leeds, Liverpool, Manchester and Sheffield are the six major cities in the National Drive portfolio, with 20 large-format screens set to be installed on key arterial routes by Q1 2020. National Drive will deliver 6m* fortnightly viewed impressions on screens that are 20% larger than the market average at 20m².

Mark Bucknell, Chief Commercial Officer of JCDecaux UK told us “Since LDN Drive launched in London in January, it has become a key branding channel for clients in the capital with powerful campaigns across categories from entertainment to motors to telecoms. With National Drive, there is now a new opportunity to deliver brand fame and reach on a national scale for our clients, with a new brand-safe digital channel that reaches audiences in the economic powerhouse cities of the UK.”

LDN Drive which launched in London in January 2019, has 89 screens. The combined National Drive and LDN Drive network will by the end of Q1 2020 cover seven major cities, with 109 digital screens, delivering over 19m* weekly viewed impressions across the UK.

This entry was posted on Wednesday, November 6th, 2019 at 09:35 @441 and is filed under DailyDOOH Update. You can follow any responses to this entry through the RSS 2.0 feed. You can leave a response, or trackback from your own site.