Automobile manufacturer Volkswagen, (VW) is promoting its efficiency campaign over atmAd cash machines across the UK in a four week campaign, planned by Mediacom that went live on 13th July. 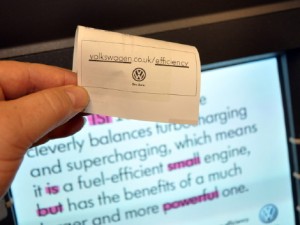 Lisa Humphreys, Media Manager, Mediacom told us “We needed a medium that could reach drivers on a one-to-one basis on a national level,”

She added “By promoting Volkswagen’s efficiency campaign at cash machines located at petrol stations, we can ensure the message reaches consumers when saving money and fuel are at front of mind”

Volkswagen’s efficiency campaign is designed to help customers save fuel and cut emissions. The ATM advertisements are part of a wider, integrated advertising campaign, which also includes press, online and a variety of outdoor formats.

Kerry Foster, Group Head atmAd also told us “Increasingly, brands are benefiting from targeted one-to-one advertising mediums that can reach a specific target audience. The innovative and eye-catching medium of the ATM ensures that consumers receive the message in a money saving frame of mind,”

“With atmAd, Volkswagen can reach its target audience with a relevant and timely message which will deliver genuine ROI,”

The atmAd campaign is expected to reach some 3 million drivers across 562 petrol stations during the period.

This entry was posted on Tuesday, July 21st, 2009 at 10:03 @460 and is filed under DailyDOOH Update. You can follow any responses to this entry through the RSS 2.0 feed. You can leave a response, or trackback from your own site.