A powerful new road safety campaign by a talented University of Technology Sydney student has gone live across oOh!media billboards and digital signage in Sydney. 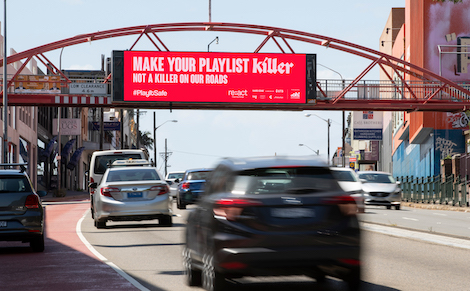 The campaign is the result of behaviour change program Re:act, which challenges university students to come up with ideas to raise road safety awareness among adults aged 18 to 25 – a demographic almost twice as likely to be killed in a traffic accident than their parents, according to new data from Australian Roads.

Re:act has partnered with oOh!media to run campaigns across three cities on oOh!’s roadside digital billboards, with Sydney now going live after a recent Brisbane launch, and Melbourne to follow at a later date.

The creative will also appear on digital displays in retail, higher education and social venues. Provided at no cost, the total media value for all three campaigns is over $850,000, marking a significant contribution to spreading the safety messaging to the wider public.

UTS student Ella Mander-Jones was chosen for her campaign drawing the young audience in before delivering a strong and clear message focused on music as a distraction on our roads: ‘Make your playlist killer. Not a killer on our roads’.

Ella Mander-Jones told us “I wanted to create something different that was on trend for a young target audience. People around my age are very much into their playlists. ‘Killer’ has a negative connotation but can also be awesome, like a ‘killer’ playlist, so I linked the two to draw people in without them knowing off the mark that you’re talking about road safety.”

In addition to supporting the campaign through media space, oOh!media also played a pivotal role in the students’ design process, deploying personnel to work with the students as they came up with their ideas, helping shape them for maximum creativity in the Out of Home format while also providing technical support.

Noel Cook, oOh!media’s Chief Commercial & Operations Officer, said that the company was proud to support Re:act for the second year running. “Young drivers have a higher risk of getting into accidents, which is important to be aware of at a time when ongoing COVID-19 issues are forcing more people to drive instead of taking public transport. This year’s theme is ‘distraction’, and it’s been a revelation to see how these gifted students have translated their objective of keeping drivers focused on the road into creative designs that will strike a chord with their age group.”

oOh!’s support for Re:act is part of the company’s broader approach to road safety. In conjunction with the Outdoor Media Association (OMA), oOh! is committed to working closely with governments and authorities to invest in research and make roads safer.

This entry was posted on Wednesday, September 2nd, 2020 at 11:08 @506 and is filed under DailyDOOH Update. You can follow any responses to this entry through the RSS 2.0 feed. You can leave a response, or trackback from your own site.