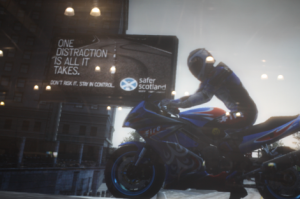 One distraction is all it takes

Craig Leiper, Managing Director, Ministry of Experience was kind enough to point this out to us – a series of advertisements for the Scottish Executive running on in-game billboards seen in Edinburgh on 19th July at the Scottish Modified Car Show 2009

Booked by Karen Wilding, Account Manager Kinetic Manchester and Danielle Stocks, Account Manager Mediacom Scotland each billboard carried messages about road safety to the many participating players and the considerable audience who viewed the game ‘Burnout Paradise‘ in High Definition and experienced the game play with thumping sound from 50w speakers.

Karen Wilding told us exclusively “This is a fantastic way to reach this particularly hard to get audience. Having done this twice in two years now it perhaps surprises us that this new medium has not been more widely used” – Mediacom were credited as being one of the first, if not THE first to do this in-game advertising in the UK – last year for the same client in a cinema foyer. 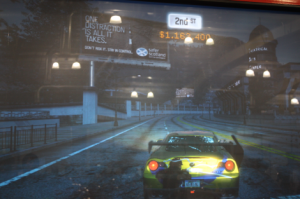 The screen deployed to demonstrate all of this to a thrilled audience was the rear projected LCD Trojan 110 HD, one of the largest self contained displays in the world, we are told,

In-game DOOH could be big business when online CMS tells the game engine what to play and media planners and buyers REALLY get involved – also imagine what could happen when you log on to upgrade your game, and the CMS hands out the latest adverts and scheduler/playout rules!!!!

You can get a feel for the show and view a near-4 minute overview of the event courtesy of Ministry Experience over on YouTube by clicking here.

This entry was posted on Friday, July 31st, 2009 at 06:54 @329 and is filed under DailyDOOH Update. You can follow any responses to this entry through the RSS 2.0 feed. You can leave a response, or trackback from your own site.