GestureTek, headquartered in Sunnyvale, California, is the company behind a neat new display that combines a game with an educational lesson on kinematics at the Milton J. Rubenstein Museum of Science & Technologyv (better known as the MOST) in Syracuse, N.Y.,

Aspiring basketball stars can try out their skills on the court while learning about the science of kinematics with the help of a gesture-controlled interactive virtual reality basketball simulator by GestureTek. 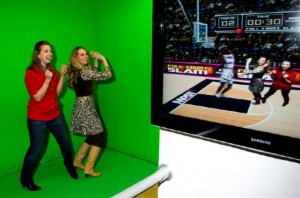 The touch-free interactive system, which aims to teach children about human musculature, skeletal structure and how the body moves (kinematics), features GestureTek’s GestureXtreme Virtual Reality Game System that immerses players into the basketball simulation. A camera captures the child’s movements and instantaneously translates those movements to the child’s identical onscreen video image, where he can watch himself in real-time as he plays on the digital basketball court against a computer-generated opponent.

“Next generation immersive virtual reality environments like this one at the MOST enhance the educational objectives by actively involving visitors in the exhibit,” says Vincent John Vincent, president of GestureTek. “By making it a fun and exciting interactive experience, kids will learn more about the science of the sport, and retain more of that knowledge by applying it directly in this environment, some without even realizing that it’s designed to be educational.”

The advanced high-end computer, camera technology and gesture recognition system deliver an authentic experience by incorporating realistic background graphics, including the museum colors and logo, and mimicking the player’s skin tone and uniform on screen.

“Children love playing basketball with the GestureXtreme system,” says Peter Plumley, project director for the MOST. “They find it entertaining, as well as empowering, to be able to control the onscreen actions of their video image. More importantly, it helps give them a better sense of how their muscular and skeletal systems work and the nature of kinematics (how the body moves).”

“Being in the business of large screen displays for trade shows, exhibits, museums and digital signage, we are well aware of how gesture control is revolutionizing this business,” says Rich Schmidt, Manager at Geograph Industries. “We often leverage new technologies from companies like GestureTek to stay on the leading edge.”

This entry was posted on Monday, August 10th, 2009 at 17:15 @760 and is filed under DailyDOOH Update. You can follow any responses to this entry through the RSS 2.0 feed. You can leave a response, or trackback from your own site.