Last week TouchTunes announced that Universal Music Group had tapped them to promote the re-Issue of Jump Back: The Best Of The Rolling Stones 1971-1993

TouchTunes will cross-promote Jump Back on its integrated network of digital jukebox screens and Barfly television screens – the promotion marks the first time TouchTunes will leverage Barfly with custom messaging to encourage plays on the jukebox. 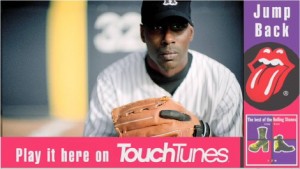 TouchTunes’ on-screen promotion for the album release includes custom-designed banners and an on-screen billboard that will attract customers to the jukebox.

Custom ads will compliment the campaign by featuring animated banners on Barfly-enabled TV screens with custom messaging that encourages patrons to play the album.

TouchTunes will be tracking Rolling Stones’ plays and capturing the influence of the Barfly call out.

Vicki Saunders, vice president, digital media and music marketing, TouchTunes told us “Only TouchTunes can run coordinated messages on both digital jukebox and Barfly screens to further engage patrons. This provides exciting new possibilities and positions TouchTunes as the ultimate interactive entertainment network. This is just one of the many things we have planned to create the best experience for our customers, at our 40,000 locations across the country.”

This entry was posted on Wednesday, August 26th, 2009 at 10:21 @473 and is filed under Scuttlebut. You can follow any responses to this entry through the RSS 2.0 feed. You can leave a response, or trackback from your own site.