Lamar Advertising worked with Omnivex and its integrator CONTI to complete the next phase of British Columbia’s Canada Line of commuter transit spanning buses, ferries, trains, and subways with more than 170 big-screen LCDs. 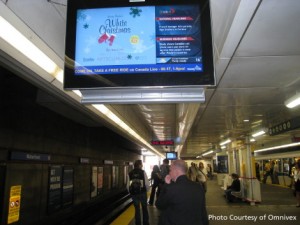 Lamar’s Commuter Digital Network currently includes screens located on the Sky Train’s SeaBus, Expo, Millennium and West Coast Express transportation lines. The newest deployment is on the recently opened Canada Line, predicted to be one of busiest regularly traveled public transportation routes in Canada, with an estimated 100,000 commuters daily. The Canada Line connects Vancouver, Richmond and Vancouver’s International Airport, which will be a main line of transportation during the upcoming 2010 Winter Olympics.

The network is used to entertain and inform commuters with transit information, advertising, news, weather and sports highlights.

A unique feature of the system is that it has real-time emergency messaging capabilities to instantly notify passengers. While Lamar manages the regularly scheduled content on the screens, the Transit Authority has the ability to post alerts and service announcements to the desired screens. 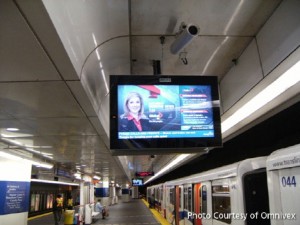 “Using Omnivex software, different levels of notifications can be sent to any of the screens remotely by the various operational units within the Transit Authority, such as the police, fire or service departments, without Lamar’s involvement,” says Montgomery.

Omnivex Certified Partner, CONTI, a full service audio visual system integrator, has been involved with the implementation of the network since it first began in 2007.

“We were contacted by Lamar early on to provide a turnkey digital signage solution including hardware, software, system design, installation and services,” said Colby Harder, president of CONTI. “We felt that Omnivex software was the only platform capable of meeting Lamar’s needs associated with managing such a large advertising network.”

By the time the 2010 Olympic Games and Paralympic Games begin in Vancouver in February 2010, Lamar expects to have screens on every platform and in every station of Vancouver’s public transportation routes.

“With the Olympics coming up, it will be an absolute home run for advertisers,” says Montgomery.

This entry was posted on Monday, August 31st, 2009 at 06:30 @313 and is filed under DailyDOOH Update. You can follow any responses to this entry through the RSS 2.0 feed. You can leave a response, or trackback from your own site.