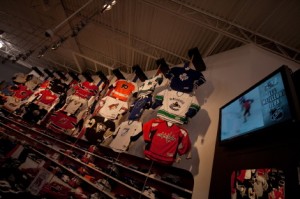 and operates the digital displaynetwork based in each of the 20 megastores of the national chain, which operates in Quebec under the banners Sports Gilbert Rousseau and Entrepôt du hockey.

The digital network is used mainly to communicate marketing messages to clients base and to contribute to the hockey ambiance within the stores. Some of the chain’s suppliers, such as Reebok and Bauer, also use the locations to advertise their new products.

“As true pioneers in the industry of point-of-sale digital displays, the
people at Pro Hockey Life can pride themselves on having been among the first to have implemented such a network at the beginning of the 21st century, and especially to have had the right instinct regarding the benefits such a marketing tool provides,” says Pierre Gendron, chairman of the Board and CEO of Groupe VIVA. 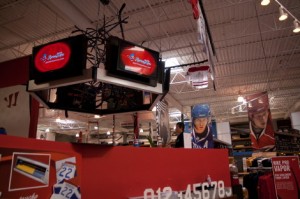 “Our concept is focused on the client experience and our digital display network definitely enhances the hockey ambiance in our stores, especially in the way some of our screens are designed, much like the jumbo scoreboards you see in NHL arenas,” says Anthony Fisher, senior vice-president marketing, Pro Hockey Life Sporting Goods.

Other than these four new stores opening in Calgary and Edmonton, Groupe VIVA also manages the network of the Quebec and Ontario stores, directly from its Boisbriand offices.

This entry was posted on Friday, September 11th, 2009 at 11:01 @501 and is filed under Scuttlebut. You can follow any responses to this entry through the RSS 2.0 feed. You can leave a response, or trackback from your own site.