We think the acronym for IBC, especially with regard the IBC Digital Signage Zone in Amsterdam these last few days is wrong, it’s obviously not the International Broadcast Convention it’s actually “I’ve Been Conn’ed” because you would have been if you didn’t listen to us and booked space as an exhibitor in the so-called DIgital SIgnage Zone.

Overall IBC 2009 was once again a very poor event, traffic was not good, the show overall has definitely lost its focus and it’s not just the pointless addition of a Digital Signage Zone that helps drag the whole event down. 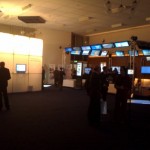 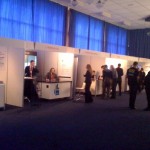 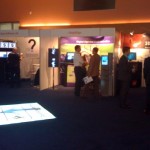 The so-called digital signage zone was empty pretty much most of the time (we have supplied the BEST pictures we took above) and consisted of about 10 vendors who should be demanding their money back: –

One of the other problems with the IBC event as a whole (not just the DS Zone) is that the show is dominated by big broadcast related vendors and what little customers there are in attendance, do not seem to want to wander away from the main aisles of the show.

IBC needs a major re-think for next year and it needs to focus on what it used to be good at.

This entry was posted on Wednesday, September 16th, 2009 at 07:07 @338 and is filed under DailyDOOH Update. You can follow any responses to this entry through the RSS 2.0 feed. You can leave a response, or trackback from your own site.