Taste The Rainbow Of Fruit Flavours

It could be an advert but it’s not likely. We publish this only so that non-UK, non-London readers and residents can have corroborated by (more of) an independent source what we have been saying (and demonstrating) for sometime now, about the mess that CBS Outdoor’s digital network is in. 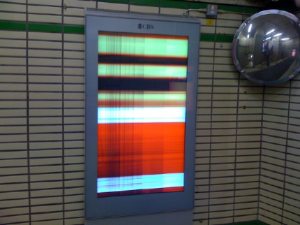 Bill Yackey from Digital Signage Today is over in London for Kioskcom / Digital Signage Show and tweeted this yesterday “@DailyDOOH isn’t kidding. So many CBS screens are out on the Underground. Not sure what’s up here!”

After the recent management re-shuffle it seems that
Arnaud Madelin, CBS Outdoor’s new UK Operations Director has been tasked with sorting the London Underground network and as we have said before he certainly has got a big job on his hands.

This entry was posted on Wednesday, September 30th, 2009 at 09:40 @444 and is filed under Scuttlebut. You can follow any responses to this entry through the RSS 2.0 feed. You can leave a response, or trackback from your own site.

One Response to “Taste The Rainbow Of Fruit Flavours”