End Of The Line For Tim Bleakley

Following the demise of Tim Bleakley it looks like CBS Outdoor have created a brand new position of UK Operations Director, a position which we are told will be “specifically focusing on the London Underground operations”. Perhaps this was in response to the mess that they have made of the digital network over the last six months? 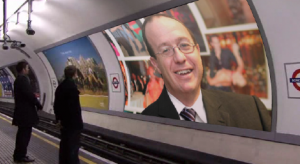 It's the end of the line for Tim Bleakley

Anyway this new role goes to Arnaud Madelin described below in the press release as an “expert on complex organisational operations” and he’s going to need to be a real expert in order to sort out the digital mess on the Undergound.

With the likes of Arqiva, Fujitsu, Maler Corp, BF Group and a couple of internal CBS teams all involved or having been involved it has been obvious for some time that the ‘buck’ never stopped anywhere for long!

Antonio Alonso, CEO International, will take over the day-to-day running of the UK business while an ongoing search is conducted for a permanent UK Managing Director.

Colin Leahy currently Managing Director of CBS Outdoor Ireland and a veteran of the business will become General Manager Sales & Marketing. Colin has been with CBS Outdoor for four years and formerly worked in management positions in sales and marketing for Diageo and JCDecaux. Leahy will work alongside Helena Kavanagh, Commercial Director London Underground, and Jason Cotterrell, Commercial Director Bus & Rail, who will both continue in their current roles.

Earlier today Tim Bleakley, UK Managing Director of Sales & Marketing, announced he would be leaving the business to pursue other commercial ventures.

Antonio Alonso said, ‘The UK is a key market for CBS Outdoor International. The changes we are implementing will evolve the reputation and client experience of our business as a world-class out-of-home media brand known for our assets, attractive advertiser audiences and superior service to customers.’

Alonso added: “We thank Tim and Deborah for their significant contribution to the business and wish them well in the future”.

This entry was posted on Monday, September 28th, 2009 at 13:45 @614 and is filed under DailyDOOH Update. You can follow any responses to this entry through the RSS 2.0 feed. You can leave a response, or trackback from your own site.

One Response to “End Of The Line For Tim Bleakley”