Not Your Father’s Billboard

Unless you’ve been living under a rock, you’ve heard that we’re in a global recession. Most industries are feeling the pinch of the economic downturn, and advertising is no exception. Ad spending is down, way down, and if you listen to the so-called pundits, you might think that internet advertising is the only place where money is being spent. 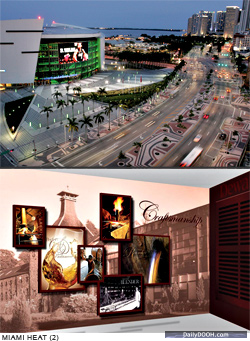 The truth is there’s another bright spot in the advertising world. This area, which has been experiencing remarkable growth, is helping to breath new life into the advertising industry—out-of-home (OOH).

With traditional advertising mediums, such as print and television, continuing to experience a decline in consumer engagement, advertisers have begun to look at alternative mediums for communicating with potential customers. Like everyone else, advertisers are staring the economic downturn in the face and as a result are spending only where the eyeballs are. Surprisingly this has led them to one of the oldest forms of advertising—outdoor. In the past five years the outdoor advertising industry has grown more than 22 percent to a USD 7.3 billion industry.

For most, the idea of outdoor advertising conjures images of roadside billboards for Mickey’s Car Wash or Susie’s Roadside Café. However, the digital revolution has finally penetrated this once outdated medium and given it a serious face lift. With the growing use of technologies like TiVo and DVR and the ever-shrinking print media market, advertisers have been drawn to the dynamic and engaging medium of digital billboards because it delivers a captive audience that can’t click away or fast forward.

Outdoor Advertising Gets a Face Lift

In 1889 the world’s first 24 sheet billboard was displayed at the Paris Exposition. The format was quickly adopted for various types of advertising. It was nearly a century later before the next major innovation in billboards appeared with the commercial introduction of digital billboards. When the first digital billboards began cropping up on the urban media landscape, they offered advertisers ‘something different’ but in a familiar format and with the promise of immediate and wide-spread impact. Operating much like ‘TVs on a stick’ their dynamic, engaging nature was their greatest advantage to advertisers. The ability to display varied content, alternating still-image ads with news updates and weather reports, made digital billboards mesmerizing in a way that traditional, static billboards have since ceased to be.

Recognizing the enormous benefit of being able to change content at a moment’s notice, digital billboard owners began selling advertising space in smaller, more flexible blocks. This enabled advertisers to capitalize on one of the digital billboard’s most powerful propositions: targeting consumers with relevant, timely content, which they found delivered a lot more bang for their buck.

In the past few years, digital billboards are an increasingly familiar part of the street landscape and some of their novelty has worn off. As the digital out-of-home (DOOH) industry evolves advertisers have begun looking for new, more dynamic DOOH mediums that will provide them greater returns and allow them to truly engage with consumers.

The average American is exposed to more than 5,000 advertising messages daily. This constant bombardment has desensitized consumers; advertisers are finding that only the most engaging content breaks through the clutter. Advertisers demand for new ways to deliver their messages that stand out from the crowd is driving the future of the DOOH industry. They are looking for not-your-average-black box-style of digital billboards.

They want a unique, visually engaging medium. The market is taking notice and we’re beginning to see a host of new DOOH technologies; among the most interesting is something called digital media façades. These are large-scale video screens affixed to the exteriors of buildings that double as both a screen and building facade, allowing advertisers to reach consumers with their messages in unexpected places.

Today more than 30 skyscrapers worldwide are outfitted with digital media facades and that number is continuing to skyrocket. They serve as advertising and branding displays for the building owners and draw a great deal of attention because of their massive scale.

This medium will continue to gain popularity as the industry begins to realize they are a win/win for advertisers and building owners. Because early generation versions of these displays were generally just modified digital billboards, they were not designed to integrate with building structures and do not accommodate for windows, masking viewing from within the building.

Different media façade designers have approached the visibility issue in different ways. Many have just installed the screen over a dedicated window-less area of the building. In the case of the NASDAQ building, which was the first to have a digital media façade, window slots were actually built into the screen face.

Another issue the industry has encountered with digital media facades has been the lack of energy-efficiency. By applying digital billboard technology to large-scale installations, power usage for these media facades became astronomical, driving up costs and leaving an irresponsibly large carbon footprint. Many have begun to address this issue by utilizing LED to cut down on power usage. The inexpensiveness of the LED technology combined with the energy savings actually saves money and increases ROI.

While advertisers are pleased with the results from digital media facades, many building owners are resistant to implementing this technology because in many cases, they would ruin the visual aesthetics of the building’s architecture.

There are several companies currently creating digital media facades from the same technology platforms as digital billboards. However, a few digital media façade designers have recognized that integrating the building’s existing architecture with the display is a priority for building owners and have begun to incorporate existing architectural products and technologies to create mediums that blend harmoniously with the building structure.

This is the first time building owners have been offered an opportunity to monetize their real estate without obscuring its unique architectural elements. For these products it is not just the technology that sets the façade apart from the competition, but also the materials and the design.

One of the more interesting applications of architectural products to create an advertising medium has been designed and manufactured by two German companies, ag4 and GKD. Mediamesh® is made of a high-grade architectural woven stainless steel mesh that has traditionally been used as an architectural enhancement. It is very flexible and can secure to any shaped building or structure. The open weave allows it to also be transparent against the building’s exterior and provides unobstructed views through a building’s windows. The mesh is imbedded with LED lighting in an innovative design that eliminates overheating, and thus the need for air-conditioning, which consumes 80-85% of the power used by traditional digital billboards. This unique application of architectural products and large-scale media technology provides a powerful digital media platform that enhances the look and feel of buildings.

Advertisers Put Their Money Where the Eyeballs Are

These new technology introductions continue to propel the DOOH market forward. The industry experienced a more than 20 percent annual growth rate between 2002 and 2007. The now USD 6.1 billion global DOOH industry is expected to continue to outpace nearly every other form of advertising, with 9.1 percent growth in the U.S. projected in 2009 and 12.8 percent in 2010.

Given the state of the economy and the ever-growing competition in advertising, advertisers are looking for a way to rise above the noise of a crowded marketplace. The advancements in DOOH are offering them a way to do that, with significant ROI. Advertising is not going away in fact it’s evolving, with new technologies blazing the trail.

This entry was posted on Monday, October 19th, 2009 at 19:20 @847 and is filed under DailyDOOH Update. You can follow any responses to this entry through the RSS 2.0 feed. You can leave a response, or trackback from your own site.