Chris Riegel, CEO of STRATACACHE believes that the new 3M Pico pocket-sized projectors will have a profound affect on the Digital Signage Market. He told InfoComm recently “Picos will decimate the traditional LCD digital signage in the next few years. Picos offer much less cost, need less power, and have a longer lifespan than LCDs in most environments,” he says. 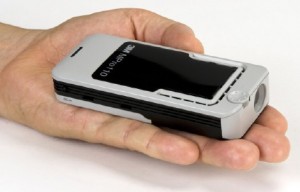 Matthew S. Brennesholtz of Insight Media, a research firm that focuses on emerging display technologies (and also author of the 2009 Insight Media Pico Projector Report) notes in the article “that the current generation of pico projectors has better performance and price than previous picos”

For the past two years STRATACACHE has even been working on developing pico optical engines with Texas Instruments (TI manufactures the DLP pico chip set, the competing technology to 3M’s LCoS chip set).

Riegel believes that Pico projectors can be used in both traditional and non-traditional digital signage. In the article he points out that they can save space in more traditional ‘point of presence’ messaging like an 8.5″ by 11″ advert at a bank teller window or even the day’s specials projected into a restaurant tabletop.

Because the LEDs used in these tiny projectors are less temperature sensitive than bulb-based projectors, pico projectors can be installed in a grocery store’s beer cooler for rear projection onto the cooler door – errr how cool would that be (forgive the pun) ?

STRATACACHE have built a pico optical engine into their media player and added a 3G wireless connection for content updates. This means that literally they can put a pico anywhere as long as there is a power outlet.

Brennesholtz also pointed our that others also are innovating around the technology “Now, there is a pico projector with Windows CE built into it that will accept an external keyboard and mouse.”

This entry was posted on Monday, October 12th, 2009 at 09:19 @429 and is filed under DailyDOOH Update. You can follow any responses to this entry through the RSS 2.0 feed. You can leave a response, or trackback from your own site.