The Bikes Are Back In Town!

These AdBikes from MOOH (Media Out Of Home) Ltd looked suspiciously like the really nice Captive People’s Tricast initiative that ran around London back in 2007 and lo’ and behold they are!

Steve Morahan (original co-founder Captive People) told us from his new base in the Netherlands, that “my old business partner had them gathering dust in his garage” – and voila they have now been put to good use.

Before its collapse, Captive People was one of Steve Morahan’s early ventures. He is now, under the guise of WeDooh, a co-founder of Doohjobs of course.

The AdBikes are marketed (same as Tricast) as having… 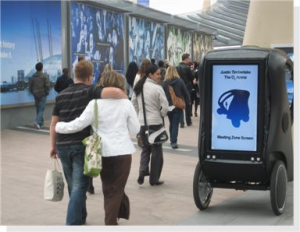 With the old Tricast systems, BreezeTech powered the Bluetooth and remotemedia supplied signagelive for each of the units – we are not sure if this is the same now.

AdBikes are sold we are told, for as little as GBP 350 per day in London and come complete with a trained rider / campaign ambassador, LCD Screen, vinyl wrap (for 1+ week campaigns). Prices vary for campaigns outside of London.

This entry was posted on Tuesday, October 27th, 2009 at 01:05 @086 and is filed under DailyDOOH Update. You can follow any responses to this entry through the RSS 2.0 feed. You can leave a response, or trackback from your own site.