Net Display Systems B.V. seem rather proud of this judging by their latest press release – it even has a catchy title ‘abate the wait’ whereas we think it sums up quite well much of what is still bad about digital signage at the moment. 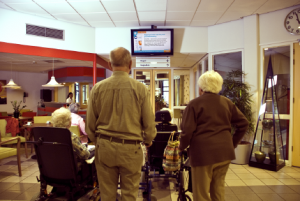 In an obviously posed photograph we have a lot of old people looking UP to a screen placed far too high and well out of normal vision. How small too does that text look to you on the screen? And goodness it looks like it has a scrolling ticker as well.

Described in the press release as an “innovative digital signage channel” we see little of anything that NDS’s Dutch partner / integrator Speak has done that makes this ‘innovative’ If anything it is repeating all of the past mistakes of generation 1.0 screen networks…

The channel shows information in multiple sections, including corporate news and also divisional news, as well as news streamed automatically from relevant RSS feeds. Vacancies, cartoons and videos are also part of the presentations shown on screen.

The installation is for Beweging 3.0, a new health care enterprise for the central Netherlands.

The press release makes much of “easing the waiting time in the waiting rooms in the care centers” but we think that all you are going to do is end up with a stiff neck.

This entry was posted on Wednesday, November 11th, 2009 at 09:31 @438 and is filed under Scuttlebut. You can follow any responses to this entry through the RSS 2.0 feed. You can leave a response, or trackback from your own site.