If you’ve ever been discouraged with your digital out-of-home displays because they didn’t allow creative content to show that extra tall building, or a fashion model’s outflung arm, that weird shaped logo, or that extra wide cityscape, fear no more. 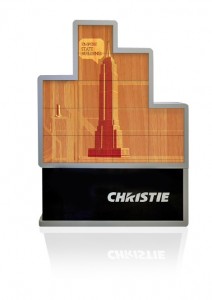 After two years of intense R&D, Christie Digital Systems, one of the world’s leaders in visual solutions for business, entertainment and industry, has launched the unique MicroTiles digital display technology that allows the creation of a virtually seamless digital canvas in almost any size or shape AND that offers spectacular, crisp visuals at any distance.

The Christie MicroTiles system represents a huge step forward in large-format digital display technology, offering superior color and image reproduction, the widest possible viewing angles, and a near absence of seams on display walls, with only a 1mm gap between the tiles.

The groundbreaking LED powered DLP-based system is designed for long, reliable commercial use in public areas, with no lamps or other consumable parts to replace.

The LED light engine, a key component of MicroTiles, is rated at 65,000 hours to half brightness usage, or nearly 7.5 years of continuous operation! 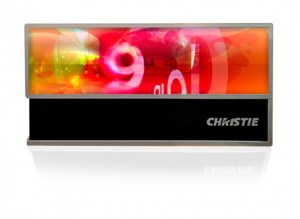 Of real benefit: Christie engineers designed the MicroTiles to be fully and easily serviced from the front.

The tiles are ‘self-aware’, meaning that time-consuming and costly color calibration needed to keep conventional ‘video walls’ looking uniform, is automatically completed by the sensors built into the MicroTiles.

And, to top it off, although the engineering behind the tiles is extremely sophisticated, these walls of tiles are controlled by a simple unit that processes the signal from the most popular digital signage and media players.

Randy Byrd, President and CEO, Sensory Interactive of Towson, Maryland, one of the technology and visual design experts who’ve seen sneak previews this year, describes this system as “one of the wonders of the world in displays.” 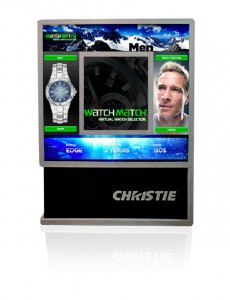 “MicroTiles represent a distinct revolution in display technology, that allows users to create their own digital canvas or digital wallpaper,” says Bob Rushby, the co-inventor and chief technology officer at Christie’s engineering headquarters in Kitchener, Ont., Canada, which did the R&D for Microtiles.

“With MicroTiles, users can express their creativity and vision, and assemble the displays in ways that have previously been unattainable using current flat panel LCD, plasma or LED walls,” Rushby says.

“Assemble the tiles any way you like, take them apart and re-assemble them in a new configuration, and they ‘recognize’ each other every time and adjust the image automatically.”

MicroTiles can easily be incorporated to fit within the physical constraints or opportunities of any building. No need to compromise!

“Christie MicroTiles open up a whole new world of possibilities for the various display markets,” says Rushby “They offer an innovative, visually striking digital solution to deliver messages and make them memorable.”

Christie MicroTiles will be on display at these North American events:

For the online press kit – or to learn how to try and register for the December 9th product showcase in New York, visit www.christiedigital.com/microtiles.

A leading innovator in film projection since 1929 and a pioneer in digital projection systems since 1979, Christie has an established reputation as a total service provider and the world’s single source manufacturer of a variety of display technologies and solutions. Since acquiring Vista Control Systems Corp., in July, 2007, Christie now offers complete and advanced solutions for cinema, live venues, control rooms, business presentations, training facilities, 3D and Virtual Reality, simulation and education as well as industrial and government environments.

This entry was posted on Wednesday, November 11th, 2009 at 16:00 @708 and is filed under DailyDOOH Update. You can follow any responses to this entry through the RSS 2.0 feed. You can leave a response, or trackback from your own site.