We have written before about aka.tv’s blatant plagiarism, it happened recently where screens.tv was about to become a plaintiff so it is only fair we think that we bring this one to the attention of Steve Barrett (even though he probably still hates us) over at Media Week.

Exhibit 1 (screenshot shown below) from aka.tv… 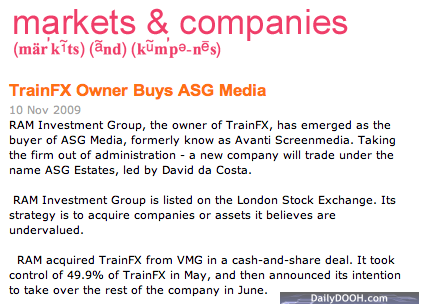 LONDON – ASG Media, the digital out-of-home company formerly known as Avanti Screenmedia, has been bought out of administration by digital screen company TrainFX, which is owned by RAM Investment Group.

Two-thirds of ASG Media’s 18 staff have been offered jobs in the new firm. Cassandra Byrnes will be head of sales.

RAM Investment Group is listed on the London Stock Exchange. Its strategy is to acquire companies or assets it believes are undervalued.

RAM acquired TrainFX from VMG in a cash-and-share deal. It took control of 49.9% of TrainFX in May, and then announced its intention to take over the rest of the company in June.

Is this original reporting by aka.tv or what?

This entry was posted on Sunday, November 15th, 2009 at 21:05 @920 and is filed under Scuttlebut. You can follow any responses to this entry through the RSS 2.0 feed. You can leave a response, or trackback from your own site.