This has got be the most innovative way ever of using a Panaspnic 103″ screen as part of a mall fixture – it’s fantastic and has to be seen to be believed! 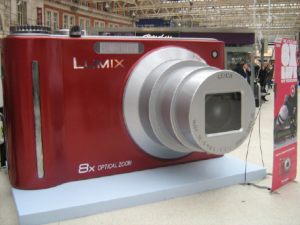 Panasonic’s flagship 103” plasma formed the centrepiece of the latest super-size installation in its campaign for the new Lumix camera, the giant screen doubled as the view finder in a 3.6 by 2 metre model Lumix camera that was resident in London Waterloo last week.

The camera is on the move at the moment, it will be at Victoria station later this week (between November 26th and 28th) and London Liverpool Street next week between 3rd and 5th December (it’s well worth a trip to see).

The fixture is 3.6 metres high and 2 metres wide and made primarily of fibre glass, it weighs 160kg and was built by a team of 6 artists over a 5 week period. The installation was put up in the middle of Waterloo station at 4am on the morning of November 19th ready to greet London rush hour commuters! 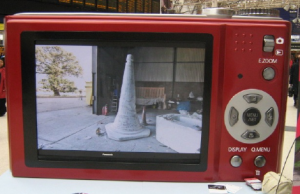 It is of course an exact replica of Panasonic’s latest Lumix DMX-ZX1 and so, so clever how they have built it in proportion around a TH-103PF10 103” plasma screen that doubles for the camera’s view finder.

Daniel Rose, Category Manager – Pro Plasma & Projector at Panasonic, told us “This is certainly one of the more interesting digital signage installs we’ve ever done. Other than its size the 103” was ideal for the install, the brightness and detail provide the type of high quality image you’d expect from the Lumix range and its reinforced glass panel makes it tough enough for such a busy environment”

Panasonic Professional Projectors and Displays Europe (PPDE) is part of the Panasonic Audio Visual Company Systems Europe (PAVCSE), a division of Panasonic Marketing Europe GmbH. The division is a leader in the development of professional AV equipment with a core focus on display and projector products. It offers solutions for professional installation for digital signage, public display, education, rental & corporate applications.

This entry was posted on Tuesday, November 24th, 2009 at 06:44 @322 and is filed under DailyDOOH Update. You can follow any responses to this entry through the RSS 2.0 feed. You can leave a response, or trackback from your own site.