York Region Transit in Ontario, one of Canada’s largest transit networks, and Byte Media Inc., have announced the recent re-launch of their on-bus Digital Media and News Network. 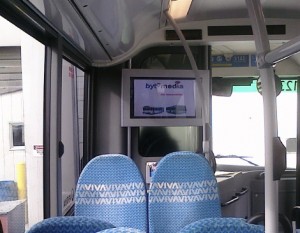 2006, and were fairly static in their content (only updating daily). They ran for one year. Byte and YRT choose to re-architect the solution and make it real time, location-based, and more ruggedized with a re-launch first seen last September. Buses operate on average 18 hrs per day.

The rugged screens have a metal frame to make them more vandalproof, and this frame is cushioned to provide shock absorbency to the LCD as the bus travels down the road. The computers are small form-factor, DC based PC’s with 3G connectivity that allows the digital signage to receive data from a central content management server which pushes out news, stock markets, weather, in addition to advertising – and, soon, transit alerts.

Byte Media is selling the advertising with a combination of its own local sales force for regional ads as well as though national agencies.

Two other major campaigns are pending and are expected to be closed shortly.

This entry was posted on Monday, January 11th, 2010 at 07:35 @357 and is filed under DailyDOOH Update. You can follow any responses to this entry through the RSS 2.0 feed. You can leave a response, or trackback from your own site.