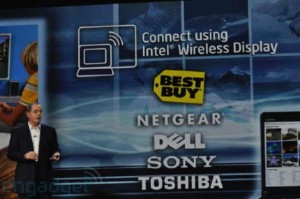 Screens will require a special adapter made by companies such as Netgear. These adapters which will cost around USD 100 receive the wireless video signals.

The focus at CES was on how “users could download or stream HD content on their laptop, and watch the footage on a large HD screen at the press of a button” – all true but we think the technology will likely have a big impact on digital signage.

in the context of DOOH mind you this type of technology has been around before – specifically wireless AV but the challenge has always been twofold; the deployment costs for hardware AND the limitations on signal strenght (especially with Retail).

Many who have tried this before will have experienced a lot of interference so this is something that Intel and its partners have to demonstrate that they have clearly figured out.

The other big issue is if you should do audio – it’s easy for everything to fall out of synchronisation – especially with HD.

The other challenge facing Intel here is the competition with all the new displays that have or will have on-board processors that run Android and flash on a chip – in those instances of course you don’t even need a PC in the back room!

Light Peak is a 10Gbits/sec technology and was used to send 3D footage between a PC and HD television on stage. The technology will be in PC’s in a year or so.

This entry was posted on Monday, January 11th, 2010 at 10:42 @487 and is filed under DailyDOOH Update. You can follow any responses to this entry through the RSS 2.0 feed. You can leave a response, or trackback from your own site.