Stop Or My Mom Will Shoot

The billboard is part of 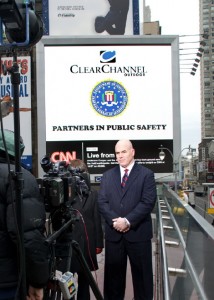 a nationwide initiative made possible through a partnership with Clear Channel Outdoor, which is providing the space as a public service. It will enable the FBI to highlight those individuals whom it is looking for the most in a given area: violent criminals, kidnap victims, missing kids, bank robbers, and more. With this service, the FBI will be able to feature these individuals and messages quickly after a crime is committed.

Clear Channel Outdoor and FBI Philadelphia established a relationship stemming from the participation of a Clear Channel executive in an FBI Citizen’s Academy Class. Through efforts of that executive, CCO offered the use of digital billboards in their Philadelphia market to the FBI during October, 2007. FBI Philadelphia used that resource to publicize fugitives from crimes and that publicity led to the apprehension of two fugitives.

FBI Philadelphia and CCO then decided to explore the possibility of taking this valuable partnership to a national level. That plan was based on CCO making digital outdoor networks across the country available, without charge, to assist FBI efforts to capture fugitives and provide important law enforcement messages to the traveling public.

In only a few months of operation, a number of fugitives from multiple cities across the country were apprehended as a direct result of tips received from these billboards. Following the success of this effort, other digital billboard companies have signed similar partnership agreements with the FBI.

Harry Coghlan , Clear Channel Outdoor – Spectacolor Division president and general manager, says, “When the FBI asked us to expand our billboard program to Times Square, we agreed immediately. This important initiative will now reach the thousands of people who pass through Times Square each day. We look forward to building on the fugitives captured to date.”

The FBI currently has access to more than 1,500 billboards in more than 40 states through this initiative. It has profiled more than 250 cases altogether. At least 30 cases have been solved as a direct result of digital billboard publicity, with many more cases solved as a result of an overall publicity effort. About 40 of the FBI’s field offices are participating in this initiative using the billboards of several companies. Over 430 Clear Channel digital displays in 33 U.S. Cities have the potential to be utilized by the FBI at any given time.

This entry was posted on Monday, January 18th, 2010 at 07:16 @344 and is filed under DailyDOOH Update. You can follow any responses to this entry through the RSS 2.0 feed. You can leave a response, or trackback from your own site.