Christie, global visual technologies company, has completed its three-year tour of the successful ‘The Path to World Expo – Introduction to Expo 2010 Shanghai China and the Retrospection of the World Expo History’ exhibition in China.

Since 2007, Christie has been on the road with the popular exhibition to various cities in China and presented memorable visual experiences to thousands of attendees.

(While we have been unable to determine yet how much of this exhibit is in digital format, we found it interesting in light of the upcoming Expo 2010. We hope to get some pictures to post later. Ed.)

Making its way to Wuhan, the last stop marked the 100-day countdown to the actual Expo 2010 in Shanghai, China. Taking place in Wuhan Museum in the Hubei Province, the main visual highlight of the exhibition is powered by three Christie Roadster S+20K 3-chip DLP projectors. The rental/staging projector, with stunning high brightness and resolution, displays visuals onto a curved screen measuring 13 meters wide by 3.5 meters high. 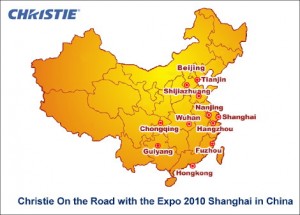 has travelled with the exhibition to ensure the best visual experience for attendees, creating multimedia extravaganzas for the various stops in Shanghai, Hangzhou, Nanjing, Chongqing, Fuzhou, Shijiazhuang, Tianjin, Guiyang, Beijing, Hong Kong in China as well as the Headquarter of United Nations in New York, USA.

Despite the snowstorms that severely affected the roads in early 2008, Christie’s well thought-out emergency plan ensured the exhibition went on according to plan in Guiyang. In Hong Kong, Christie helped to realize the massive large-scale outdoor visual projection at the Victoria Harbor. At the Headquarters of the United Nations in New York, Christie visual solutions were deployed to screen the content of the visionary Expo 2010 Shanghai China event. Visited by high-ranking government officials including China’s President Hu Jintao and Vice-Premier Wang Qishan, Christie brought the three main visual attractions to life in Beijing.

“Christie has provided extensive support to all our major exhibitions and created a series of unforgettable visual experiences for our visitors,” says Liu Xiuhua, vice-director of media and communications with the Shanghai Expo Bureau. “The perfect visuals displayed by Christie projectors helped us fully express the core spirit of Expo 2010 Shanghai China. Christie’s staff is highly professional and a joy to work with. Throughout the tour, Christie projection solutions are very durable and reliable. The company offers excellent customer service as well as technical support.”

“Christie is fully committed to supporting the Expo 2010 Shanghai China promotional activities,” says Frank Xiao, general manager, Christie China. “Our main goal for the exhibition and the current Expo sites is to bring perfect visual images to audiences around the world. The successful collaboration with the Shanghai Expo Bureau and Christie has enabled the world to visually experience a brand-new China. As we countdown to the Expo 2010 Shanghai China, we will gear up to help present one of the most memorable world Expos.”

Christie Digital Systems USA, Inc. is a global visual technologies company and is a wholly-owned subsidiary of Ushio, Inc., Japan, Consistently setting the standards by being the first to market some of the world’s most advanced projectors and complete system displays, Christie is recognized as one of the most innovative visual technology companies in the world. From retail displays to Hollywood, mission critical command centers to classrooms and training simulators, Christie display solutions and projectors capture the attention of audiences around the world with dynamic and stunning images.

This entry was posted on Sunday, January 17th, 2010 at 20:07 @879 and is filed under Scuttlebut. You can follow any responses to this entry through the RSS 2.0 feed. You can leave a response, or trackback from your own site.