Coca-Cola is celebrating its 25th anniversary with an unusual BlowUP installation, this giant mobile phone enabled deployment in Hoogstraat in Rotterdam. 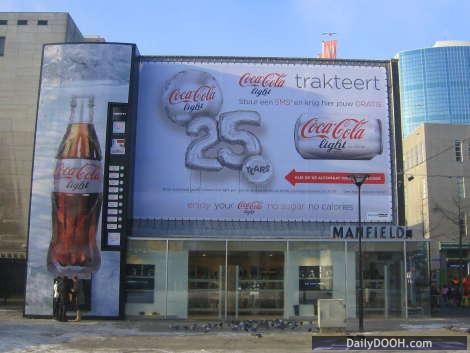 Katrin Robertson, Group Managing Director of blowUP media told us “We are very pleased that Coca-Cola is using our effective medium to draw attention to the campaign. We are convinced that the creative realization – BlowUp in combination with mobile – appeals to the target group and will be the talk of the city.”

What we especially like about it is that for the entire month of January, people can send a text message to 5040 to receive a code on their mobile phones – the code is entered into the Coca-Cola dispenser (this as you can see is as tall as a house) and the customer receives a 330 ml can of Diet Coca-Cola !

This entry was posted on Thursday, January 21st, 2010 at 10:31 @479 and is filed under DailyDOOH Update. You can follow any responses to this entry through the RSS 2.0 feed. You can leave a response, or trackback from your own site.