Following the news of the Haiti earthquake, Adrian Hopper of RAMVISION (formerly ASG Estates Ltd.) contacted the Disaster Emergency Committee (DEC) to offer free broadcasting across their Shopping Centre Network – with of course the agreement of their property partners to support an Emergency Appeal. 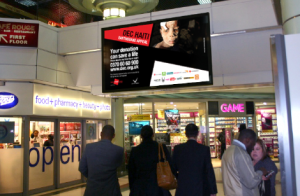 This campaign is running in the 36 RAMVISION equipped shopping malls across 650 screens.

The frequency is 25 x 15 second appeals per hour per location, which equates to something like 162,000 advert plays per day and reaching almost 16 million during the campaign period.

RAMVISION had an immediate and unequivocal response from their property partners and mall owners and a 2 week campaign for the Disaster Emergency Committee Appeal started yesterday.

David Da Costa. Ram Vision Chief told us “While not wishing to make PR mileage out of such a terrible disaster we are proud to have helped and it is a testimony to the ability of digital media to react quickly and positively in this situation.”

Ram Vision would like to thank John Thompson at Ogilvy for helping them react so quickly (Ogilvy produced the original creative for DEC).

This entry was posted on Friday, January 22nd, 2010 at 13:43 @613 and is filed under DailyDOOH Update. You can follow any responses to this entry through the RSS 2.0 feed. You can leave a response, or trackback from your own site.