An advertising campaign, recently launched with the aim of changing the world’s appreciation of fragrance, driving consumers into retail outlets and impacting sales, is a fragrance industry multi-media initiative developed by The Fragrance Foundation.

The One Drop Changes 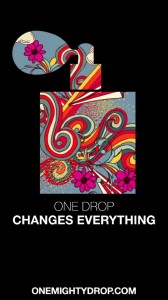 While the campaign is now up and running, it will hit digital screens in February and March via the innovative Adspace Digital Mall Network. The largest in-mall digital video network in the country has partnered with The Fragrance Foundation to run a Public Service Announcement on behalf of
the campaign.

“We have many valued customers in the fragrance category,” says Dominick Porco, chairman and CEO, Adspace Networks Inc. “Our mission has always been to drive retail sales and we are pleased to be able to support The Fragrance Foundation’s efforts to create excitement in this important category.”

A network of 1,400 in-mall digital eight-foot tall billboards fitted with 65” plasma screens will animate and bring to life the One Drop Changes Everything icon visual. 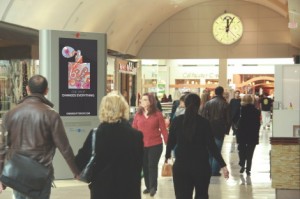 The campaign is also running on a Times Square jumbotron plasma billboard in February/March.

“This is just the beginning,” says Rochelle Bloom, president of The Fragrance Foundation. “We believe that it will make the consumer look at fragrance in a new way and engage with new enthusiasm.”

Adspace Networks, located throughout more than 100 Class A malls across the United States, consists of 1,400, eight- and nine-foot-tall plasma ’Smart Screens’. The Smart Screen displays show programming which combines a mix of the top 10 sale items in the mall, the hottest seasonal items available, mall events, and local and national advertising. The network reaches over 100 million affluent consumers each month.

This entry was posted on Tuesday, January 26th, 2010 at 21:30 @937 and is filed under DailyDOOH Update. You can follow any responses to this entry through the RSS 2.0 feed. You can leave a response, or trackback from your own site.