There’s an interesting pilot taking place in the UK at the moment. At first glance Colchester in the South East of England might not seem like the most likely location for a pilot of cutting edge mobile phone technology but being a pretty average UK town makes it a good place to test just how interested ordinary citizens might be in using their smart-phone cameras to interact with poster sites. 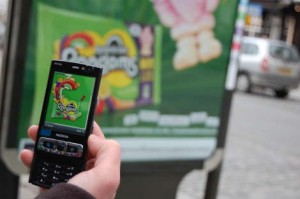 Remember our story of a few weeks back ‘All Billboards Should Have QR Codes‘? Well, for that to happen and be of any use, all mobile phones would need a QR code compatible app (an easy enough process if the plethora of Android, Blackberry and iPhone apps is anything to go by).

Nokia’s approach here is still app based – in order to take part in the pilot, Nokia’s Point & Find app must be downloaded by sending an SMS to a shortcode (note that the Point & Find app does include other features not mentioned here including acting as a barcode scanner).

Once downloaded, viewing any of the poster sites in Colchester through the camera of a compatible Nokia device will automatically offer the user on-screen hyperlinks to content specifically related to the poster in question, ranging from video clips to competitions (achieved through a combination of image-recognition and GPS technology).

At that point of course you are getting into the realms of Layar type augmented reality browsers as well. 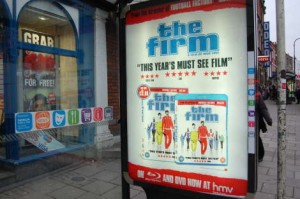 We sort of liked the idea up until this point but we also noticed a series of icons that have been developed which when viewed through the camera, trigger links tolocal online information – the icons can be found on ‘street furniture’ such a bus shelters and telephone kiosks as shown in the picture here.

Nokia claim that their approach is unique – they should have perhaps replaced the word ‘unique’ with ‘closed’ or ‘proprietary’ as they have much the same meaning in this instance.

The project is a collaboration between Nokia, media owner JC Decaux and out-of-home agency Posterscope and has been approached very much as a learning exercise and all three stress that no decisions have been made as to future availability to other advertisers.

I am sure this is a useful exercise. It’s a shame that those advising Nokia have chosen a somewhat proprietary path as this sort of thing done correctly could really go viral. For that to happen though Nokia need to recognise that their are other handsets out there!

Those involved were at pains to point out that “to some extent QR codes do have similar functionality however the main reason that they have not become mainstream outside of Japan is that there has been insufficient media activity that explains the proposition and encourages consumers to download the software” – well errrr, there is little difference with what Nokia are doing here, the instructions and the download app.

This entry was posted on Tuesday, February 9th, 2010 at 07:14 @343 and is filed under DailyDOOH Update. You can follow any responses to this entry through the RSS 2.0 feed. You can leave a response, or trackback from your own site.