Every 60 seconds, OBN digital boards in Toronto, Calgary, Edmonton and Vancouver are tallying, through RSS Feeds, the dollars being raised, in real time, through a unique charitable effort that empowers Canadians to help their hometown athletes pursue their athletic dreams.

The C.H.E.W. (Canadians Helping Each Other Win) campaign was launched by Wrigley Canada, a Proud Partner of the Vancouver 2010 Olympic Winter Games, to raise a minimum of $500,000 for the Canadian Olympic Foundation, a registered charity founded by the Canadian Olympic Committee to provide financial support to Canadian athletes across all Olympic sports. Now through March 21, a portion of the proceeds of each pack of Wrigley’s Excel/MD, Extra/MD and Juicy Fruit/MD chewing gums sold are being donated directly to the Foundation. 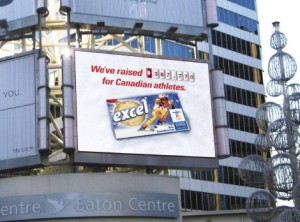 partnered with Wrigley Canada to develop the campaign that features Wrigley’s Excel, Extra and Juicy Fruit chewing gums, along with images of notable Canadian athletes, on the OBN boards. The campaign also includes TV, print and online.

“This campaign has really captured the attention of Canadians and we can immediately broadcast how much is being raised, in real time, while showcasing Wrigley’s chewing gum products and Canadian athletes, on our digital boards,” says Peter Irwin, president of OBN.

“The digital video boards are a key component of the C.H.E.W. campaign as they help generate awareness and consumer advocacy for our efforts to raise funds for Canadian athletes pursuing their dreams,” said Dan Alvo, Wrigley Canada’s director of marketing. “By providing real time updates toward our fundraising goal, consumers see how their contributions are making a difference.”

Wrigley Canada is an Official Supplier of the 2010 Winter Games.

This entry was posted on Wednesday, February 10th, 2010 at 09:00 @416 and is filed under Scuttlebut. You can follow any responses to this entry through the RSS 2.0 feed. You can leave a response, or trackback from your own site.