Turgeon traced Loto-Québec’s use of digital screens since year 2000 when the company started working of changing the dynamics for both retailer and consumer at the point-of-sale level. Following extensive research, an initial pilot project saw six digital screens installed for six months, and then 100 for 12 months as the company took its deployment slowly and steadily, researching all the way.

“One of the challenges 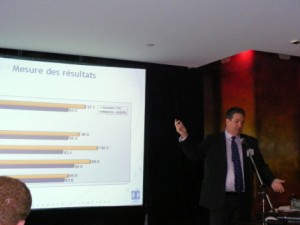 with putting in new digital screens was the need for more space at the retail level,” said Turgeon of the screens that carry a mix of advertising and information. “Another was the adoption by consumers themselves.”

At the 100 screen level, Loto-Québec evaluated performance, finding that 68% of consumers had noticed the screens and 95% of those felt the screens added a positive element at the retail level. Sales were up significantly at all four main sales outlet sectors: food stores, dépanneurs (conveniece stores), gas stations and pharmacies.

By 2007, Loto-Québec had increased its screens – now 42” – to 250 and was finding that there was a 20% added value with their use. By 2008, the total number of screens reached 8,700 screens. Each uses a 100-second loop which is divided into: 40% for advertising partners (chocolate bar brands are popular); 10% messages; 30% information (winning tickets; value of prizes in upcoming draws); and 20% devoted freely to the retailer for its own promotions).

“In 2010, we’re completing deployment in all outlets; developing use of split screens; putting two screens with different material in some outlets; and offering amber alert,” said Turgeon.

Loto-Québec has developed the entire project in-house to control costs.

“It has resulted in 90% reduction in costs from if we had had it handled outside,” Turgeon said.

This entry was posted on Sunday, February 14th, 2010 at 23:59 @041 and is filed under DailyDOOH Update. You can follow any responses to this entry through the RSS 2.0 feed. You can leave a response, or trackback from your own site.