LocaModa On The Miracle Mile

Those attending the Digital Signage Expo, #dse2010, in Las Vegas this week, as well as ordinary tourists, will get an eyeful with a 126 ft. LED screen on Miracle Mile just in front of (the DailyDOOH team hotel) Planet Hollywood. 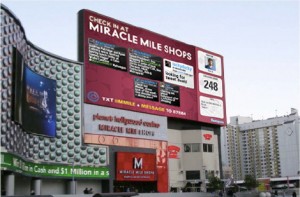 Including as it does LocaModa and Foursquare technology integration on Clear Channel Spectacolor’s screen, it allows passers-by, using their mobile device, to text messages which will be shown on the screen.

If they text often enough, they may be declared ‘Mayor’ with their picture up and other benefits – this app will also be showcased on IndoorDIRECT‘s network of 1000+ screens, which includes Wendy’s and Carl’s Jr, Ed

Jayne Karalo, director of community for LocaModa, says that the technology can be used for coupons-to-phone, loyalty programs and other promotions.

LocaModa used a similar screen application to promote Toscanini’s ice cream shop in Cambridge, Massachusetts, prior to bringing it to Las Vegas.

The application on the Clear Channel screen on the Miracle Mile is officially up all this week.

This entry was posted on Monday, February 22nd, 2010 at 08:59 @416 and is filed under DailyDOOH Update. You can follow any responses to this entry through the RSS 2.0 feed. You can leave a response, or trackback from your own site.