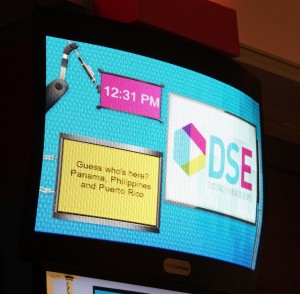 This may well have to be pointed out to you because the content on the screen does NOT make the display stand out (more on that later) but it sure is one of the most interesting displays on show at #dse2010.

It’s high up in the series of different shape screens at the entrance to the digital signage hall itself (once you are inside the LVCC).

NanoLumens is a company that we have covered before and we have a detailed story up about them again in the next few weeks cos’ their screen technology is incredibly exciting.

Briefly though, this display is: –

We think it would probably retail at something like USD 75,000.

The content we are told was given to NanoLumens by the show organisers. Frankly I would have told ’em to shove it – it’s truly appalling and does this beautiful display no justice whatsoever.

This entry was posted on Wednesday, February 24th, 2010 at 01:05 @086 and is filed under DailyDOOH Update. You can follow any responses to this entry through the RSS 2.0 feed. You can leave a response, or trackback from your own site.