Transportation has long been a fertile ground for digital signage. Screens are becoming ubiquitous on buses, vans, trucks, along walkways in airports, even alongside escalators. 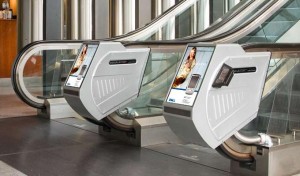 A digital signage attachment for escalators

Now a Korean company Adcalator wants to fit screens on handrails of escalators. Arriving yesterday (with interpreters in hand), Adcalator pitched their escalator attachments that positions a digital screen on the base of the escalator railing.

The attachment not only displays messaging on the LCD display but simultaneously cleans the hand-rail using UV rays to disinfect the handrail as it travels through the machine.

Could the sanitation feature be a key differentiator in today’s age of bird and swine influenza paranoia? Ed

The product we are told is installed in the SM Mall of Asia in Manila, Philippines, a number of locations in Mexico and in Johannesburg, South Africa.

Our Manila contacts commented that the screens  in the SM Mall of Asia “look nice, but all the kids expect the monitors to be touched and keep poking the screen”.

The only North American install was recently taken out of the O’Hare airport due to ‘the advertising company not meeting its commitment’.

Adcalator is currently looking for North American resellers to deploy in US and Canada.

The product is built with a Samsung LCD inside (which suggest a 3-year warranty on the screen) and is available in either single or paired configuration.

Adcalator did not have details on the software platform used to manage the displays, but after spending approximate USD 16K MSRP on a pair of Adcalators, costs of your favorite software license and a PC will seem insignificant.

If you have trouble installing the Adcalator, you can have a team of technicians fly out from Korea for an additional USD 1500 plus flight and incidentals.

Not a bad deal if you consider how much hospitals, airports and public facilities spend on cleaning, sanitation and um…. way-finding. (I guess the Adcalator puts these under the same line item).

For more on the Adcalator visit http://www.adcalator.com/ or speak with www.microchannel.ca, if you are in Canada and think this is a good idea.

This entry was posted on Wednesday, March 24th, 2010 at 18:06 @796 and is filed under DailyDOOH Update. You can follow any responses to this entry through the RSS 2.0 feed. You can leave a response, or trackback from your own site.