Walking into the hall containing The Marketing Point de Vente show in Paris over the last few days and you just knew that the show felt right – straight away felt right. 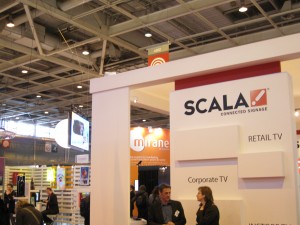 Scala In Front - Mirane Just Behind

Strategically placed at the corner of a main alley, the first digital exhibitor you came across was Scala, with a massive but simple stand, a first test run for the stand that will also be used at ScreenMedia Expo we believe, Ed.

Walking past, it was always busy and in fact at the end of the show, they had clocked up several hundred visitors, a lot of whom were new contacts.

This was probably the show’s strongest point. Not only was it co-located in the middle of a regular POS show but there were other retail-related shows happening at the same time on the same Exhibition Hall complex at the Porte de Versailles; meaning that it was easier for out-of-town and regionally based retailers to justify the trip to Paris! 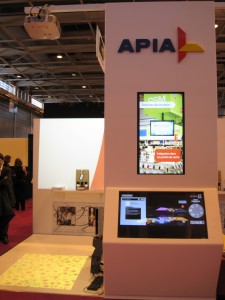 In this respect, the conferences were also well chosen – pitched clearly at the inexperienced but curious, they were clear, informative and hopefully inspiring to the uninitiated.

The other ‘best spot’ , right in front of the entrance/exit to the conference area, was taken up by Apia Solutions, part of the Apia Group which is already a key player in static signage, shop-fitting and all things retail.

Michel Martinez was on hand to demonstrate their award-winning touch–screen way-finder totem, which not only shows you the best way to navigate around a shopping mall, but also can transmit the same info to your mobile phone.

The solution won the coveted ‘Special Prize from the Jury’ at the recent ‘Ecrans d’Or’ Ceremony, and is already in action in several locations at “La Defense” Commercial District – the mini-Manhattan on the edge of Paris. 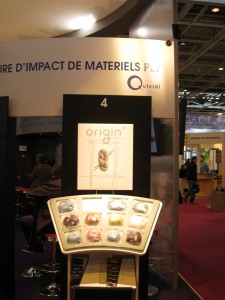 Speaking of prizes, the Prize for the best ‘crossover act’ has to go to the indefatigable Olivier Duizabo of Quividi, who was using his connections with Media 6, another POS giant, to move sideways into audience measurement of static displays – after all it’s the same technology.

Perfectly situated in the regular POS zone, but right in front of Scala, he literally had one foot in each camp.

And prize for the fastest installation must go to Michel Baronnier of TMM, who told me that they are currently at 800 screens on that famous FNAC deal, working flat out at 50 screens per day – Guinness Book of Records perhaps?

Dominating the centre of the Digital Media zone was Mirane. The brave boys & girls from Bordeaux had abandoned the surfing beaches of the Atlantic coast and swapped their Bermudas & Bikinis for winter gear to battle through the wind & rain in the capital.

Apparently they have several big wins in the pipeline and almost ready to announce, so watch this space… 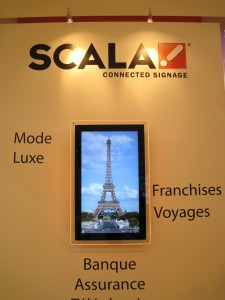 But they weren’t the only ones in a buoyant mood. Everywhere I heard tales of ‘several big contracts ready to sign or to be announced’.

Word is that there are currently some 15 or more tenders currently open for installations of 1,000+ players… And at least 5 big banks (or was that rather 5 competitors for one big bank…?). Other stories told of existing customers renewing & extending networks and getting more adventurous with programming & content.

And even the new potential customers were turning up well-informed, cheque-book in hand and ready to talk turkey.

There were, however, some gripes about the amount of visitors that actually showed up in the Digital Media area compared to expectations. One thing that exhibitors hate is the traditional crowd of number-swelling students who always turn up on Wednesday (schools closed) – though funnily enough, organisers love them…!

And there were quite a lot of quiet periods. But after all, its quality, not quantity that counts. And as one Exhibitor reminded me, you only need one or two really juicy customers to turn up to make it all worth while.

This entry was posted on Friday, April 2nd, 2010 at 07:17 @345 and is filed under DailyDOOH Update. You can follow any responses to this entry through the RSS 2.0 feed. You can leave a response, or trackback from your own site.